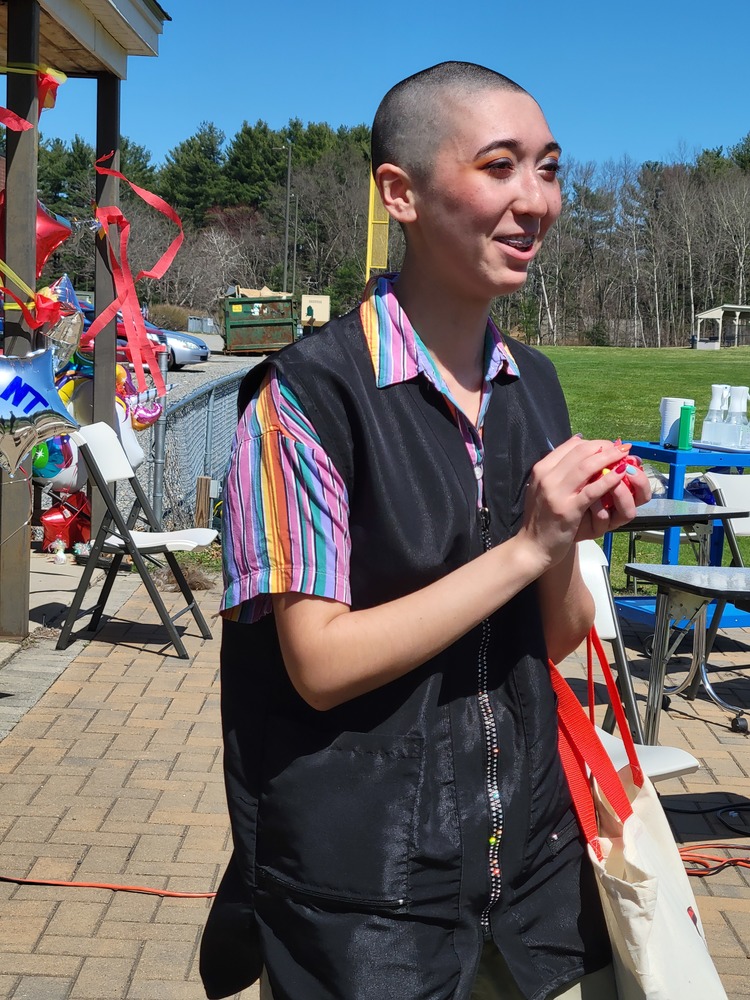 Yula Wackell smiles just minutes after getting a buzz cut.

Yula Wackell had the idea to raise money and awareness for the Children’s Alopecia Project long before the Slap Heard ‘Round the World.

Yula transferred to Nashoba Tech last fall for senior year and immediately focused on a longtime goal: to get a buzz cut for a good cause.

That mane event came about on a bright and sunny April day when Yula held a shave-athon for CAP, and it was shear magic, with Yula and classmates in the Cosmetology program shaving the heads of 13 students and staff members outdoors on the athletic fields with a crowd of students watching.

The event is Yula’s senior project, which every graduating senior at Nashoba Tech must plan and carry out.

The biggest cheer of the day came when Yula’s was head shaved, bringing a four-year hair affair to a happy conclusion.

And Will Smith, Chris Rock and Jada Pinkett Smith were far from the minds of those in attendance – even if that trio did bring some media coverage to alopecia earlier this spring.

Even CAP’s founder, Jeff Woytovich, and his wife, Betsy, made the trip from Reading, Pa., to witness the event.

“When Yula contacted us to let us know about her event, we were excited,” Jeff Woytovich says. “It’s nice to have some good PR for a change.”

Yula lives in Millbury and spent the first three years of high school at Blackstone Valley Technical High School in Upton, leaving for personal reasons and transferring to Nashoba Tech for the final year.

“When I started in cosmetology, I studied hair loss,” Yula says. “I learned how big a stigma it is, and I wanted to break those societal pressures. More than 50 percent of the population will experience hair loss.

“I found out about the Children’s Alopecia Project, and I thought it was a worthwhile charity. It’s not, like, ‘Here’s a wig.’ CAP really builds confidence in children. It’s very important if you’re a child with hair loss to see that there are other children who look like you. I contacted them and I got an answer right away. And it all came together today.”

Nashoba Tech Principal Jeremy Slotnick is one of the staff members who agreed to go under the razor. He says he was happy to do it for such a good cause.

Sayda Betsold, one of the Cosmetology instructors at Nashoba Tech, says Yula has been focused on the shave-athon since day one back in August.

“On the very first day we met, Yula said, ‘I want to shave my head at the end of the year for a good cause,’ and I said, ‘That could be your senior project,’” Betsold says.

The shave-athon may be over, but Yula still has grand plans. After two more years in barbering school, Yula plans to continue to try to be a positive force.

“I have a plan to create a business model that is inclusive for all people, that is a great environment for employees and clients, and to create a safe, inclusive environment,” Yula says, then plans to move to Japan to further her education.

Ultimately, Yula wants to lead the charge to bring the hair industry into the 21st century.

“The hair industry is one of the top three most polluting industries, so I want to make it more eco-friendly,” Yula says.

To find out more about CAP, visit Children’sAlopeciaProgram.org.

Peter Zaferocopoulos, a sophomore from Littleton, shaves the head of Yula Wackell, a senior from Millbury. 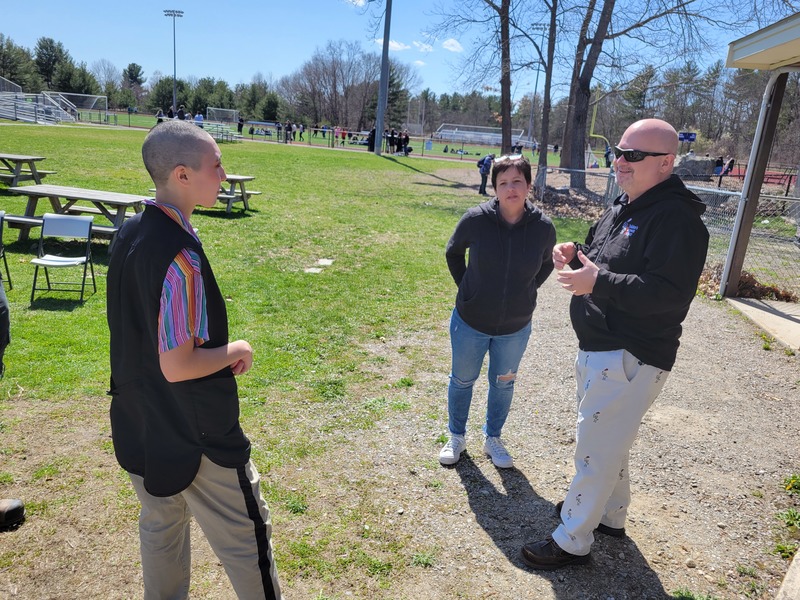 Nashoba Tech Principal Jeremy Slotnick gets his head shaved by Helen Warwick, a sophomore from Shirley.