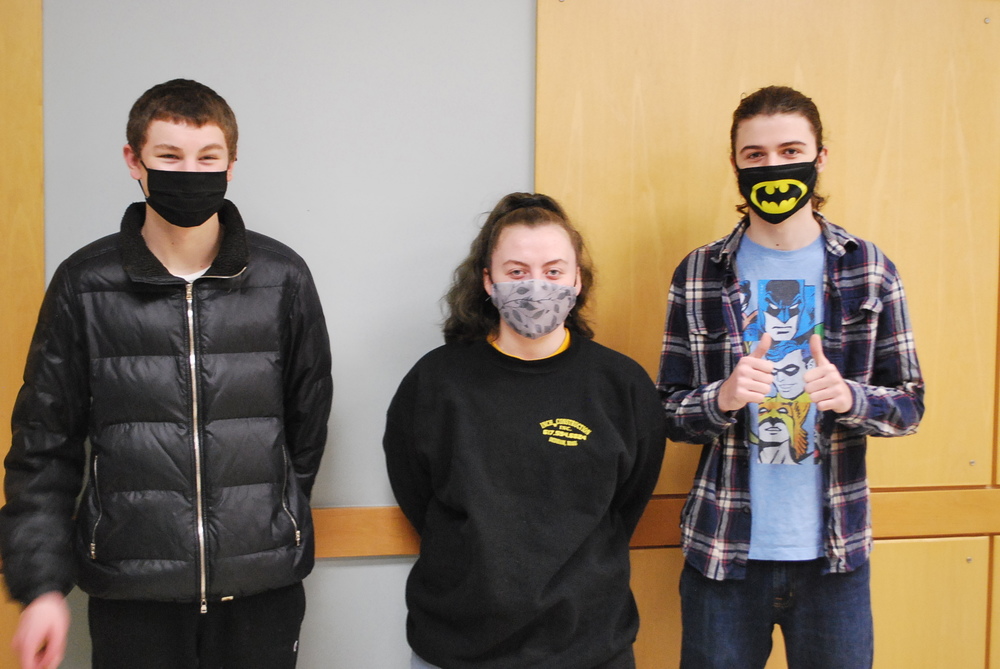 That’s what the Theatre Guild at Nashoba Tech decided to take when the pandemic shut down any hope of producing a play.

They picked up their cameras and took action, shooting a movie instead.

So rather than seeing students perform “Urinetown: The Musical” on stage at Nashoba Tech’s Performing Arts Center, you can watch it in the comfort of your own bubble when it’s streamed online on Saturday, March 13, and Sunday, March 14.

According to Emily Smith, Nashoba Tech’s Theatre Arts instructor, “Urinetown” is about “a big organization that’s in charge of regulating water consumption.”

“This company has a monopoly on toilets, and people have to pay to use public toilets,” she added. “It’s a dark comedy.”

The original musical premiered in 2001, with music by Mark Hollmann, lyrics by Hollmann and Greg Kotis, and book by Kotis, who got the idea for the show while traveling in Europe and encountering a pay toilet.

Smith said that as a technical high school with state-of-the-art equipment, Nashoba Tech was well-positioned to produce a movie.

The decision to produce a movie instead of a play was good news for senior Brian McCall, who is directing “Urinetown.”

While comfortable in front of a camera (and performing on stage), Brian has had his focus on becoming a film director. Then, the pandemic happened.

“This is a great opportunity for experimenting and experiencing the field,” said Brian, who is hoping to study film at Emerson College next fall. “It’s been a ride. Acting has been fun, but my main focus has always been behind the camera.”

Brian and the rest of the crew have finished shooting and are in the editing process. He said it was challenging because the actors had to lip-synch their songs, then record them later. He and his technical assistants, including music director Betsy Fiedler  and dancing director Bryan Landgren, are now editing the singing parts into the film.

“This is the part I thrive on most,” he said. “I’m looking forward to editing. It’s full of challenges.”

Smith said Brian and his crew have made safety the top priority in filming “Urinetown,” with the town of Boxborough offering socially distanced spaces for filming.

“We are very fortunate that the town of Boxborough provided us with several shooting locations, including the police station and town offices,” Smith said. “They opened their arms to us so we were able to shoot on location.”

Brian sees “Urinetown” as a great opportunity for him, not just because he’s directing but also because he’s acting in the movie (playing Bobby Strong) and he’s using the experience as his senior project in the TV & Media Production/Theatre Arts program.

“We had a lot of fun doing it,” he said. “It’s not often you get to direct yourself in a production.”

Some staff members are also performing in the movie, including Eric Stevenson, Stacy Stevens, Bruce Sullivan and Ryan Wood.

Tickets to stream for Nashoba Tech’s production of “Urinetown” go on sale Monday, Feb. 22. Go to nashobatech.net for ticket info.