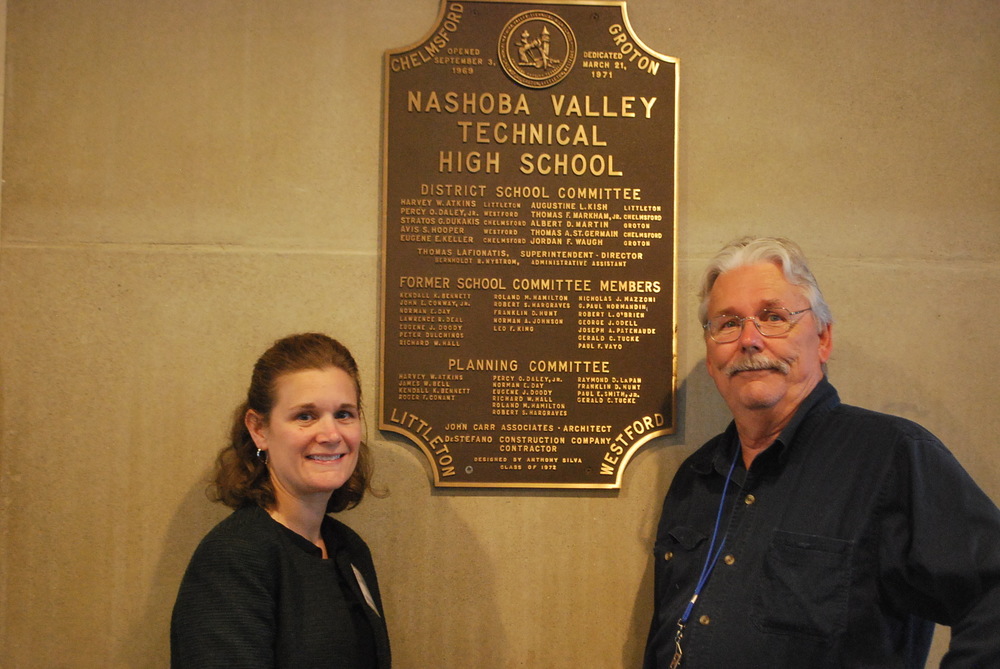 When Charlie Ellis first stepped into the new school constructed  at 100 Littleton Road in Westford, he was one of about 400 kids, ages 13-17, who wasn’t quite sure what he wanted to do with his life. He wasn’t the only one.

It was 1969, the end of a decade that saw change and upheaval in the country, perhaps the most significant changes in the two centuries since the American Revolution that created it. The Vietnam War and its often-violent protests. The assassinations of two presidents and one beloved civil-rights leader. Young people realizing they had the power to spark significant change.

On September 3, 1969, in the midst of that upheaval, Nashoba Valley Technical High School opened its doors to more than 400 of those young people from four disparate towns — rural Westford, Groton and Littleton, and the more urban Chelmsford, a town on the rise that was more urbanized than the other three communities in what then made up Nashoba Tech’s district. (In the five decades since, Ayer, Pepperell, Shirley and Townsend have been added.)

“I think I needed a new start,” Ellis says. “I was not excelling at Littleton High School — through no fault of the school, it was all me.”

But things were, let’s say, a little turbulent those first few days, says Ellis, a kid with two years in at Littleton High who, on his own admission, was often in the middle of that turbulence.

“It was difficult for the bulk of us to acclimate,” he says.

But then something happened. The instructors hired by the district to unite these kids started to gain a foothold. They convinced the kids that they came to this new school to gain an education not only in math, English and science, but in a trade that they would pursue as a career after they graduated. They needed to work together to make it happen, and the teachers were able to make them realize that they had, as Ellis says, “a chance to be our own school.”

“We had a great bunch of vocational instructors. They worked us hard, but they told us they were here for one reason — to teach us a vocation,” Ellis says. “And they were able to mold us into a fairly cohesive group of kids, some of whom I still see today. And the school started to move forward.”

Ellis, who is now chairman of the Nashoba Valley Technical High School Committee, is happy to note that not only did he shape up, but he went on to a successful career in the graphic-arts field. Now retired, he runs his own construction business, specializing in historic restoration and additions.

From being part of the first graduating class in 1971 to being a nine-year member of the School Committee, Ellis has pretty much seen Nashoba Tech grow into a school that is producing the workforce of tomorrow.

And he couldn’t be prouder.

“The vocational programs here are as rigorous as ever, and I believe the academics are on par with any school in the Commonwealth of Massachusetts,” Ellis says.

Nashoba Tech offers a dozen Advanced Placement courses and was recently selected as one of  the few high schools in the state to receive the Early College Designation, allowing students to earn college credits on campus at no charge.

“The biggest change has been the electronic revolution and the different programs the school now offers as opposed to 50 years ago. It’s how society has evolved, and the school has been able to adapt to that very well,” Ellis says, crediting Nashoba Tech’s advisory boards, groups of professionals who help to keep the school’s technical programs up to date with what is happening in industry.

“Another huge asset,” he adds, “is that the school has had vocational-technical instructors who worked in industry. They don’t just teach theory, they’re able to teach the practical part, too. They see the promise in these students and are able to prepare them to lead the next technical revolution.

“I don’t think you realize at the time the tools they give you to put in the toolbox that you’re going to carry around with you for the rest of your life.”

When Ellis thinks back to the early days of Nashoba Tech, the hard times are overshadowed by the fact that the school has become successful at what it does — preparing students for the workforce, whether that includes a college education, as it does for more than half of graduates these days; going right into full-time employment in fields that are experiencing immense demand for skilled workers to replace those who are retiring; or entering the military to gain even more hands-on experience.

“So what am I doing now?” Ellis says of his seat on the School Committee. “I’m paying it back. We have a great faculty and staff, and the administrative team is very supporting of vocational education. My ultimate goal is to make this the best vocational school in New England. We have a lot of hard work to go, but it’s coming.”

Nashoba Tech Superintendent Denise Pigeon and School Committee Chairman Charlie Ellis of Littleton stand in front of the original plaque dedicating the school in 1969. Ellis, a member of the first graduating class at Nashoba Tech in 1971, now sits on the committee.