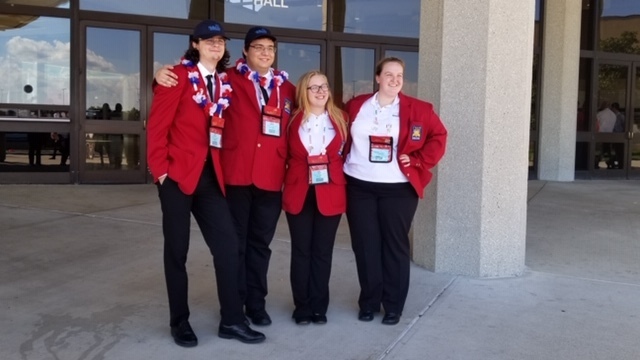 The list of accomplishments Jason Gendron had racked up in his four years at Nashoba Tech was already long enough by the time he graduated on June 1. But he didn’t let little things like graduation and summer get in the way.

The Dracut resident joined a group of Nashoba Tech students who had qualified for the SkillsUSA National Leadership and Skills Conference in Louisville, Ky., from June 24-28. And all he did there was come home with a gold medal in the Information Technology Services competition, beating students from Illinois and Idaho for the top spot.

Jason is the first Nashoba Tech student ever to win a gold medal at the National Conference.

Before that impressive feat, gave the valedictory address in front of his 164 fellow graduates. And that was eight days after he had received his Associate’s degree in Information Technology/Cybersecurity at Middlesex Community College, which he attended full time during his last two years of high school through Nashoba Tech’s Dual Enrollment program.

After winning a national silver medal last summer as a junior, this was a golden way to cap off Jason’s high-school career.

“Like last year, it was a tough competition, but going for the second time, I knew what I was up against, so it was a little easier to prepare for the competition,” Jason said.

The competition was a two-day affair, the first day consisting of a certification exam that counted toward the students’ final score, and the second day putting the competitors through 10 grueling stations through which they had to rotate, including stations on software and job interviewing.

Jason said he felt “very comfortable” working his way through the stations and felt he had a strong chance of taking gold once the scores were tallied.

Not bad for a kid who hasn’t even turned 18 yet (that’s in August).

Nashoba Tech isn’t the traditional route for a Dracut resident. Most would go on to Greater Lowell Technical High School if looking for a vocational-technical education. But Jason visited a Nashoba Tech open house as an eighth-grader and decided its newly created Engineering Academy was the place for him.  “I liked the programs the school offered better than other schools and all the things it had to offer for curriculum and technical programs,” he said.

Three other students from Nashoba Tech students competed at the National Conference in addition to Gendron. They all qualified by earning gold at the State Competition. Samantha Archer, a postgraduate from Pepperell, earned a bronze medal in the college division for Early Childhood Education, and the team of 2019 graduate Olivia Spoth and incoming junior Brian McCall, both of Pepperell, competed in the Audio-Radio Production.

So what’s next for Jason? He’ll enter the University of Massachusetts Lowell’s Honors Program to study for a Bachelor degree in Information Technology. And since he already has his Associate degree, he’s on track to enter UMass Lowell’s Master’s program in Cybersecurity at the age of 19.

But that’s getting too far ahead. For now, Jason is spending the summer at Nashoba Tech, of course, as he has since he started there four years ago, helping to update the school’s computers and get them ready for the coming school year.

The school’s Technology Department is more than happy to have him. It’s not often you have a gold-medalist working for you.

Photo caption:  Nashoba Tech students who competed at the SkillsUSA National Leadership and Skills Conference in Louisville, Ky., are from left, Brian McCall of Pepperell, gold-medalist Jason Gendron of Dracut, Olivia Spoth of Pepperell, and bronze-medalist Samantha Archer of Pepperell